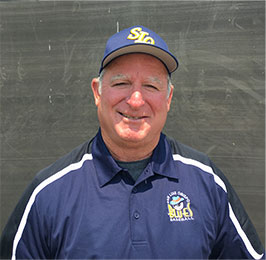 We would like to introduce former Baltimore Orioles player and Cal Poly Mustang MVP, DAN MARPLE in his first season as our new Head Coach and Director of Baseball Operations. With Dan’s ample experience and utmost enthusiasm for baseball, he will play a huge role in our team’s success as he looks to redefine what it is to be apart of the SLO Blues organization. We wish him the best on his journey in developing the skills of these young athletes and supporting them to become the best players they can be both on and off the field.

Also joining us for their first seasons, we would like to welcome former Kansas City Royal pitcher and Cal Poly Club Baseball pitching coach ED GRAVELL, and former Seattle Mariners player and ‘All-City/All-Seattle-Metro’ area award winner FRED BOGART as the new assistant coaches for the SLO Blues. We are thrilled to have such great baseball minds joining us in our pursuit of another great season.

Ed’s 54-year baseball experience is key to enhancing each athlete’s individual skill set. He will also provide the athletes with an encouraging mentor who cares a lot about his players as they strive to be the best people they can possibly be.

Fred has a huge passion for baseball; he’s been through and seen it all. His experience both as a collegiate and professional athlete set him apart from others as he establishes himself as one of the many great leaders of the Blues organization.

Former Cal Poly and Blues alumni CONNOR O’HARE will return to where it all started as an undergraduate assistant coach this spring. Born in San Luis Obispo, Connor started his baseball career at Santa Barbara City College and earned a spot with the Blues that following summer. During his years at Cal Poly, Connor was a two-year letterman majoring in business administration with a concentration in accounting.

And last but not least, we’re excited to welcome STEVE TOLLEY, former Cuesta College and Arroyo Grande High School baseball coach to our coaching staff. Growing up in Glendale, Steve played high school football and baseball. While baseball was his passion, he decided to become a police officer for the City of Santa Barbara. Steve’s 30-year baseball career experience will be pivotal to the incoming athletes and towards the Blues success as they look to have a breakout season.

We hope all of you Blues fans wish our new coaching staff success and are excited to cheer on your favorite baseball team!

Season tickets available now online, 1 for $139. Invite your family and friends for a summer evening of fun and baseball.

“When the Blues Score, You Score!”